r/Superstonk – The analysis of Bloomberg Terminal data shows, that there are at least 115 million shares in circulation and that the data has been manipulated after April 2021.

Moved the edits to the top and added a heading.

Guys, I would like to highlight that those numbers of shares in circulation are based only on the data from Bloomberg Terminal, and the number of at least 115 million shares is based on the filings from April 2021. Since then, lots of things have changed eg. including my GME portfolio which quadrupled. We will probably never know what is the real number of shares, but those 115 million, in my opinion, is a bare minimum.

Last time, when the new Bloomberg Terminal screenshot came out with Gamestop data, it got me thinking if the data there is reliable and can be used to prove the manipulation in the stock. So in order to do that, I analyzed every monthly Bloomberg post dating back to March 2021.

The findings are fascinating and they show that the data might have been manipulated after April 2021, or the method of calculating the Institutional ownership has completely changed. I lean more towards the former. Moreover, based on the data from Bloomberg, I can say with confidence that the number of shares on the market back in April 2021 varied between 115 million to 125 million.

I am gonna shortly present the whole process but first, you may ask why I analyzed the data up to only March 2021. Well…the answer to that is quite simple, I couldn’t find any more posts with Bloomberg data with older dates. Secondly, these last few Bloomberg posts depict that shares held by institutions were above the total number of outstanding shares, more precisely it was 121.74% of the outstanding share and 137.46% of float based on the filing from 25.04.2021. And the most recent one from 17.04.2022, which was available here on Superstonk, shows that institutions hold only 45.81% of total shares, and 40.17% of the float, so something happened between April 2021 and now, and I will try to analyze that.

Hypothesis and the data

My hypothesis is that the data is completely invalid and with the methodology described below I will try to prove it. Since there is no guidance provided by Bloomberg on how the ownership is calculated etc., I need to assume some stuff based on the general knowledge and the findings from the Internet.

I decided to write down the percentage of shares held by institutions and the top ownership type in an Excel spreadsheet, and I started calculating the number of shares based on the numbers provided by Bloomberg.

So here is the data already in the Excel spreadsheet.

As you can see it is quite a lot. 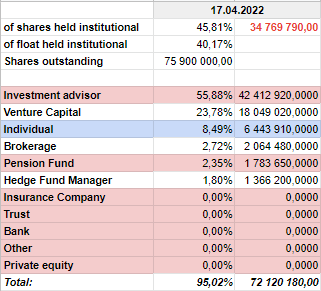 Okay, let’s move on. We have already numbers of shares sorted by top ownership, so let’s try to calculate the total number of shares, based on those ownership numbers and the percentage of the shares held by institutions.

How to specify which types of ownership are included in the institutional holdings. Well, it is quite obvious, we have to google it. 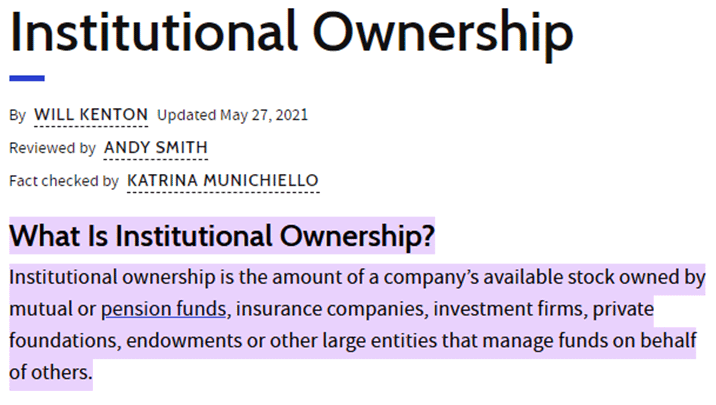 Based on that I decided to include in Institutional Ownership those groups:

I didn’t include brokerages, Venture Capitals (VCs), and hedge fund managers (HFMs), because brokerages can hold our shares, VCs, in the Gamestop case, may hold shares of our beloved Ryan Cohen, and the HFMs may love our stock so much that they hold it in their own personal portfolios.

Another reason for that was to give some margin error, just in case, there is something wrong in the assumptions or calculations. If we would include shares of these ownership types in the final calculation the total number of shares would be even higher, so yeah, treat it guys as a safety factor. 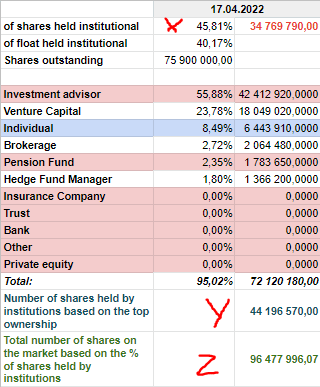 In the red cells are the types of ownership included in the calculations and the number in red is the number of shares held by institutions.

Let’s omit that for now and go further with the analysis.

so around 97mln shares. If we would include the Venture Capitals into that the number of total shares on the market would be around 135mln shares, a lot right?

I applied the same method to other dates and here are the results:

Here, before posting the last picture, I would like to go back to that point in which I discussed that ownership type percentage/number is not similar to the percentage of shares held by institutions. In a perfect world, where there is no stock manipulation, the percentage of the shares held by the institutions should be equal to the sum of percentages of Investment advisors, Pensions Funds, Insurance Companies, etc., but it is not. Well, obviously there is something fishy happening with the data, and the last table, in which the institutional ownership was higher than 100%, will show you that. 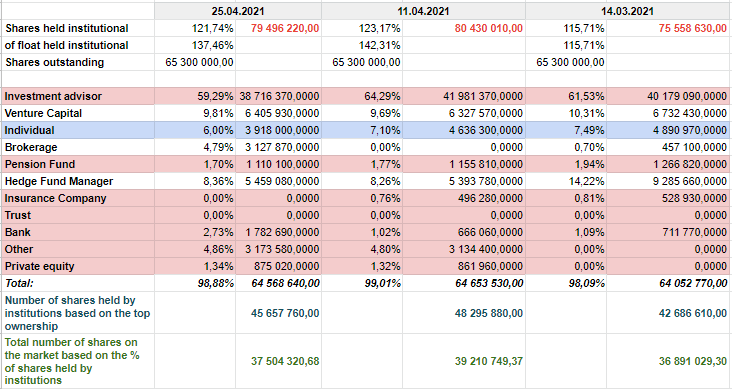 Here is an example for smooth brains: 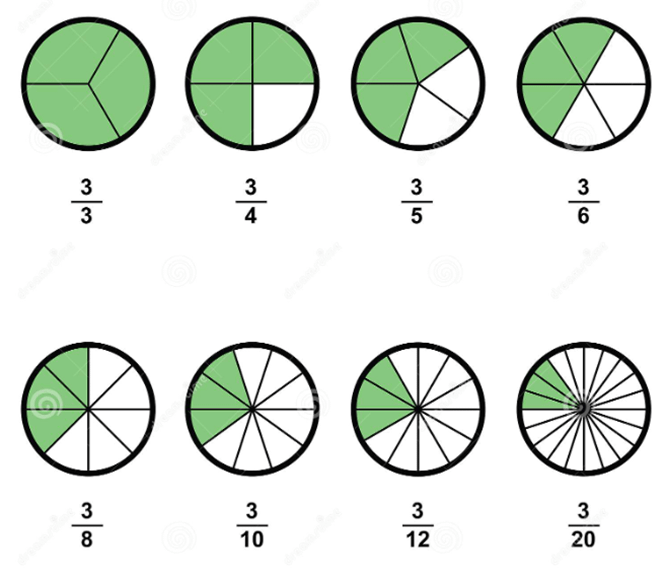 Simple representation of how the fraction work

Thus, it proves that something is wrong with the data, and the calculation method I wanted to use from the beginning is not working for all of the time periods. It confirms that way of the data representation in Bloomberg Terminal has changed and it happened between April and May 2021. Please keep that in the back of your head. I will try to explain that a bit later.

So after proving that the no-fuckery method does not work, it makes now only sense to assume that the percentage of ownership is based on the total number of shares on the market, not on the outstanding ones – that was my previous assumption.

Let’s get to it. Back in April 2021, Bloomberg Terminal showed that the percentage of shares held by institutions was equal to 121.74%, which gives 79,496,220.00 shares held only by institutions. Quite a lot right? and it is after the January sneeze when supposedly shorts had closed their positions…hehehe.

2nd calculation method for the data from March/April 2021

Following that logic, it gives us 79,496,220.00 held by institutions. Now, the top ownership percentage has to be used to calculate the total number of shares on the market. It is gonna be done similarly to the previous method, so we take only the numbers from the VCs, Insurance Companies, Trusts, Banks, Others, and Private Equities, and by a sum of those numbers, we will divide the number of shares held by institutions. The result should represent the total number of shares in circulation (real and phantom shares). 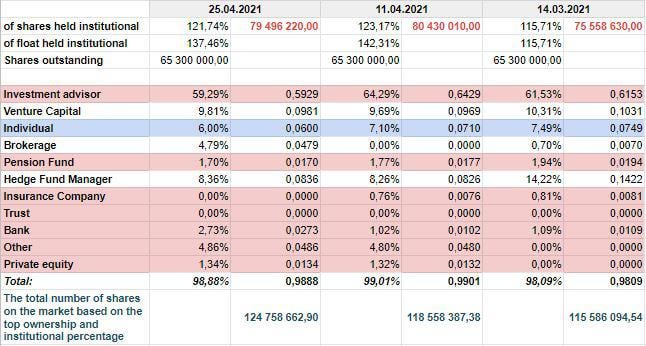 Here is an explanation based on the 25th of April 2021 data:

X – is the number of shares held by institutions, thus:

Y – is the number of total shares on the market and it is our unknown.

It means that back in April 2021 number of shares in circulation was around 125mln.

Results of the 2nd calculation method for the data from December 2021 to April 2022.

The only logical explanation for that is that the percentage of institutional ownership is completely manipulated by Bloomberg, and it all happened after April 2021, when the Institutional Ownership went suddenly from 121.74% to the level of 56%.

Here is the graph, which shows that nicely: 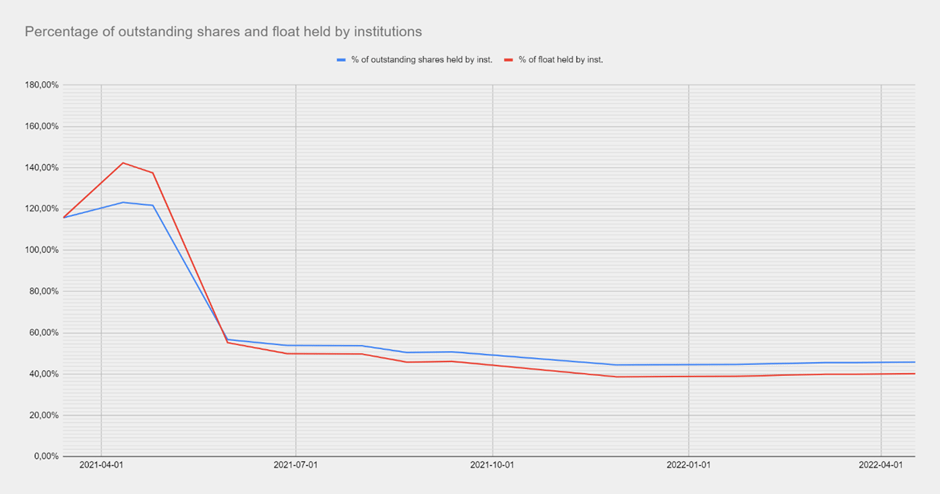 Percentage of outstanding shares and float held by institutions

We can clearly see that after April 2021, the percentage of float held by institutions became bigger than the % of shares held by the same body. It should be always lower, which means that the blue line in the graph should be below 1.

Here is a simple explanation of that issue:

The apples represent outstanding shares. Let’s assume that there is a number of 200 outstanding apples, these ones everyone can trade. In that story, there is Ryan, who is an institution and he buys 100 apples out of 200. Thus, the float (remaining apples left on the market) is 100 apples, so these are the apples that can be traded by other people.

I do believe, based on those findings, that the Top Ownership always relates to the total shares on the market and we can use those numbers to estimate for example, how many shares are held by individual investors by compiling filings from Gamestop and the data presented in Bloomberg.

If you noticed some errors in my reasonings, calculations or you just simply have questions regarding that DD please let me know. I’ll do my best to answer everyone. Moreover, if there is anyone who has Bloomberg Terminal from before the January sneeze or the data of other companies, I would be really grateful to get those just to check whether my methodology can be applied to other stocks or not.

To summarize, the calculations show that there are at least 115 million shares available on the market and a sudden drop, which happened after April 2021, in the % of shares held by institutional investors was a simple manipulation of the data to hide the real numbers. It proves that we were and we are right about the HFs not closing their short positions, and the only way to end this blatant manipulation happening across the markets is just to buy, register and hold our shares.